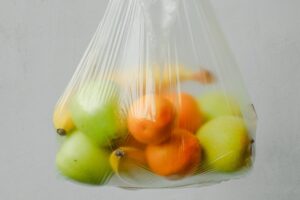 Good news! A new thing has begun, called the ‘Flexible Plastic Fund‘. This is a collaboration of companies that have got together to make the recycling of ‘soft plastics’ (which are widely used in food packaging) work. This involves coordinating companies who will do the processing, and subsidising the price so that it is economical to recycle. The aim is to make recycled plastic the default material for packaging, instead of virgin plastic.

What does this mean for us? This summer we’re beginning to see the roll-out of collection points at certain supermarkets, where customers can bring their soft plastics for recycling. Which companies are at the fore seems to vary around the country, but here in the Midlands the easiest places to recycle are Sainsbury’s and the Co-op, and each page link will get you to a list of supermarket locations. Look for the special bin where you normally put your bread bags and carriers. [Edit – now Tesco too, but no list to link to.]

Warning – very little packaging will TELL you it’s now recyclable – it will take a while for the systems to catch up. But if it falls in these categories, go ahead and add it in. Stretchy plastic is still included as always, and crinkly plastic plus cling film have now been added.

The rules are simple – clean and dry OF COURSE. Nothing compostable or biodegradable (they have different ingredients). And any of these or similar flexible plastic films. This list below is from Sainsbury’s, but the Co-op list is similar. 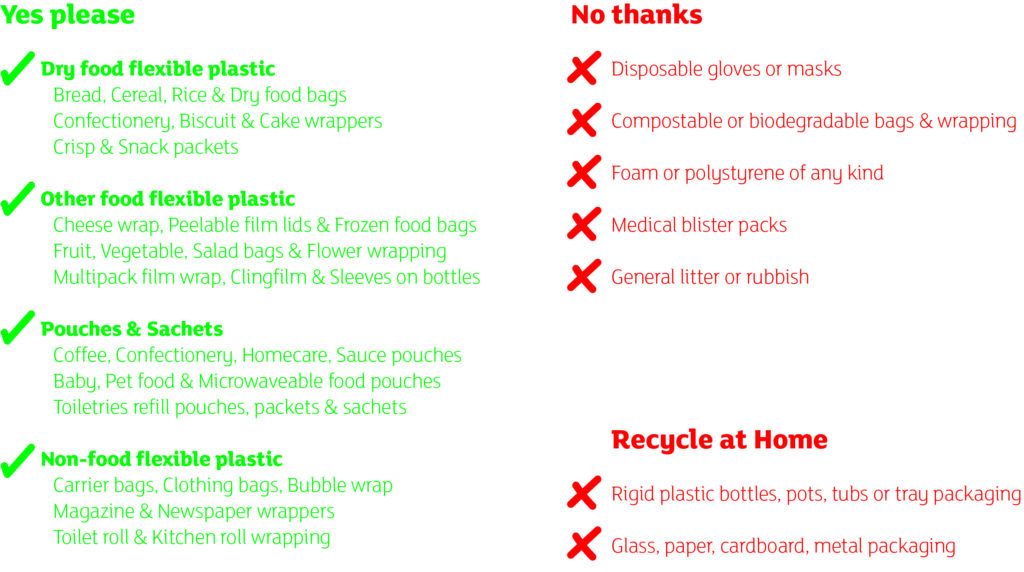 TIP: to save a huge mess of bits of plastic floating about, just hang a small bag somewhere, such as a bread bag. All the little scraps of film can go in there – yogurt tops, biscuit wrappers, vegetable bags, crisp packets. Keep adding more and more, pack it in tight. Perhaps pack many crisp packets into one, or many cat food pouches into one (I’ve managed 15 I think). Do it as you go, it’s not then a big job waiting for you at the end. Then just drop it in the collection bin when you pass a Sainsbury’s or Co-op that is in the scheme. Aldi and Tesco both have plans to expand beyond their initial trials, so have words with your local supermarket.

Keep in mind that if you have a Terracycle collection point near you, crisp packets and the like taken to them will generally result in money going to a local charity. But when taking stuff to Terracycle, it’s really important to make sure the different ‘streams’ are kept carefully apart. Never let crisp packets mix with biscuit wrappers, for example. The recycling is paid for by different sponsors.

The first preference is always to avoid buying these plastics in the first place. Crisps and chocolates are a treat, not an everyday need. But it’s good to know that, if unavoidable, they can now be recycled.