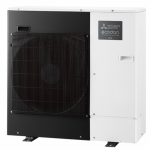 There’s a lot online about Air Source heat pumps, pro and con. The gist of it *seemed* to be that IF you have a really modern, super-insulated home then an ASHP is great, or IF you are replacing oil central heating then at least it won’t be more expensive to run. Or IF you could afford a Ground Source HP, then there was a good chance of it being up to the job. But (or so we deduced) IF you have an ordinary home on gas central heating, you would end up paying far more to warm your home with an ASHP, and you’d need to have HUGE radiators and/or underfloor heating, and put up with a LOT of noise. Or so people said.

In December our son Tim had an ASHP installed, for his recently-purchased 50 year old home in Yorkshire, to replace an inefficient old gas boiler. They ran the heating as little as possible, and typically in winter it would be first thing in the morning, a bit a lunchtime maybe, plus the evening. He was keen to become gas-free (to reduce dependence on fossil fuels) and had already replaced his inefficient ceramic hob with an induction hob. We were concerned it wouldn’t be warm enough, or it would be way too expensive to run. But we were very interested to see how it played out, especially having it installed during the winter!

Tim has a large-ish three bedroom detached house, with two of the bedrooms built into the roof angles, with rockwool in the cavity walls and uPVC double glazing.  He spent quite a bit of effort adding extra insulation in the loft and the various nooks and crannies around gabled upstairs windows. Also checking and improving the draft proofing around the home. (These are things everyone can and should do, whatever their heating system.)

It took three (really cold) days (with no heating at all) to remove the old gas boiler, install the new system and replace the radiators, and the installers came back a month later to add antifreeze and sign it off. 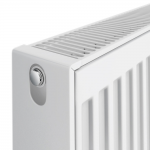 Most of the radiators were replaced (they were rusted and leaking anyway). The new ones are more efficient –  finned double radiators replaced the single un-finned ones and so are thicker but a similar length. One small radiator is triple thickness to get more heat into the room. He already had the 15mm pipes needed for a good flow. 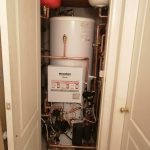 The 90l hot water tank in the airing cupboard was also replaced with a 250l tank to accommodate the larger heating coil. It also has modern ultra effective insulation, so feels cool to the touch. (So different from the days when one had to cover them with old sleeping bags and duvets!)

Since then, with only minor teething problems, he’s been really happy with the system. They typically run the space heating around 19°C, in a home which is occupied all day long. The whole house is maintained at this fairly steady temperature during the day, and a couple degrees cooler at night. The flow temperature varies according to conditions and settings, but is typically around 37°C. If it’s freezing outside the system automatically adjusts the flow temperature to 45°C for the conditions. (This is the “weather compensation curve”.) Clearly the longer it’s really cold, the less efficiently the system runs – but it’s still pretty good even around freezing.

The flow temperature is periodically boosted to about 50°C to heat the hot water tank, according to the timer, and then it goes back to the normal level. Once per month the immersion heater in the water tank kicks in to heat the water to 60°C to prevent legionella developing.

The ‘coefficient of performance’ (CoP) is what everyone talks about for evaluating heat pumps, so Tim has been tracking this carefully. He finds that, once past the trial-and-error stage of optimising the running to his liking, the CoP bounces around mostly between 3 and 4, and during February averaged 3.8. The CoP means that for each 1kWh of electricity put into the system, he gets 3-4kWh of energy out. It typically takes about 20kWh per day of electricity to generate 75kWh of heat. A modern condensing boiler would have burnt 80kWh of gas (for the same level of heating) and the old boiler was burning 100kWh of gas.

When heating the water using the heat pump, efficiency drops to around 2.5 – 3.0, but hot water is a very small proportion of the total heating time, as you’d expect.

Tracking the CoP in relation to electricity used and heat generated

He’s compared notes with someone who lives nearby who also has a heat pump. The other family have an older house with solid walls, but are getting comparable performance. Tim’s doing slightly better mostly by having a cooler house and less demand for hot water.

When we visited them in January, we were comfortable (they did tweak the temperature up a degree for us oldies!). And although we had a look at the heat pump, we couldn’t hear it at all indoors. I only recall noticing it when we were stood next to it! (That may depend on where it is in relation to your living spaces, or which brand, etc.)

These various calculations are for kWh of energy, not ££ cost, but that is changing dramatically at the moment. The running costs so far seem to be not much more than their previous home, but it feels much more comfortable. The old house was always cold, and now they’re not.

The old boiler in the new house during November averaged 50 kWh per day, peaking in 1st week of December at 90+ kWh. Hard to say if that’s considerably more or not, but the house was definitely cold. (Remember: burning 50 kWh of gas was probably only producing 40 kWh of heat.)

The average consumption of the heat pump for first 70 days (colder than November) was about 20 kWh per day, equivalent to 50-60 kWh per day of heat.

So, overall, it looks a worthwhile venture. The HP costs less to run than the old inefficient gas boiler, and he thinks a modern condensing boiler would only cost a bit less at his current rate of 5.8p per unit of gas. And the house is definitely warmer! 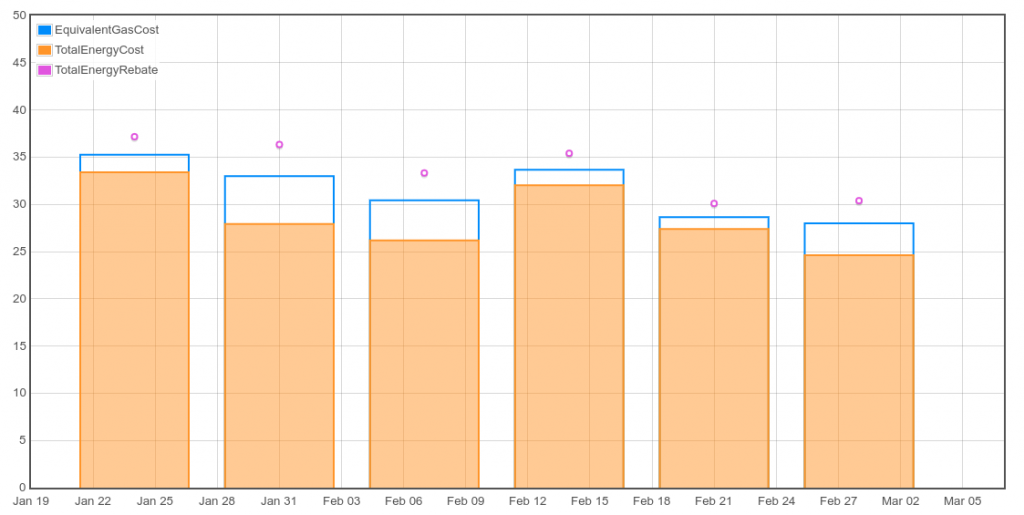 Your mileage may vary: if you use much more hot water or keep a much warmer home it would cost more, but it’s looking way better than I had imagined it would.

For your own estimates, work out how much energy you use per year (in kWh) to currently heat your home and water. Compare it to the EPC estimate for your home. That would give you an idea what you might need from electric heating.

Just putting this out there, to balance the more extreme predictions you see! Tim has now had solar panels and a battery installed, which will further complicate any calculations, but it seems like a heat pump is at least a viable option for older houses, after all.