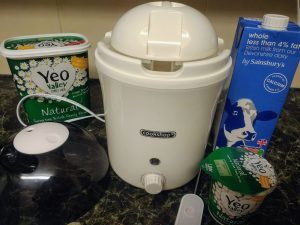 Part of our  lunch routine is to finish with yogurt. This used to be generic fruit flavoured, and has gradually evolved to live yogurt, then plain yogurt with fruit, jam or lemon curd. Plain yogurt is easily obtained in 1 litre tubs (I like Yeo Valley) but even though the tubs are made of recycled plastic, it’s still an awful lot of plastic in a year.

So, as described in an earlier post, I’ve been experimenting with making my own yogurt. I’ve been making it regularly since Spring (even while out on our narrowboat) so I’ll write up my final ‘recipe’ here. I have been specifically aiming for a thick and creamy yogurt with a mild flavour, but you may be less fussy. Your result will be largely governed by the yogurt starter you use, I really like Yeo Valley. I use an electric 1 litre yogurt maker, the simplest way to maintain the right temperature throughout the process, though I’ve discussed other methods previously and list instructions for other options at the bottom of this page. (eg If you pre-warm the milk, you can incubate it in a 1 litre wide-mouth flask.)

The process takes about 12 hours, so start it at a time when you can attend to it again in 12 hours, like 9am or 9pm. The initial stage is only about 10 min.

Put a couple good dollops (heaped dessert-spoons) of plain, live yogurt into a small jug. Stir in some milk, then a bit more until the yogurt is quite thin.  Pour the milk mixture along with the rest of the milk into the yogurt maker, turn on and cover. Leave untouched for 11 hours. (It will be yogurt after 8 hours, but longer makes thicker yogurt). When done, turn off, and leave for an hour or two. Then remove inner container and put in fridge to chill.

I used to pre-warm the milk, but being hurried made it grainy rather than smooth.

I then transfer mine to one of the old 1 litre Yeo Valley rectangular tubs I have kept, for better use of fridge space, and also so I can start another batch when the current one is not yet gone.

Some useful resources elsewhere, if you want to know more: